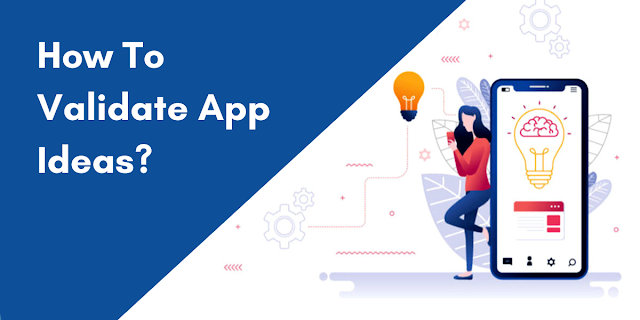 The craze for mobile apps is increasing every day. A

vast number of SMEs, enterprises, and new-age entrepreneurs are launching unique mobile apps and generating significant revenue from it.

However, at certain times, many people face difficulty in finding new ideas and entering into the mobile app industry.

If you are also facing the same issue, then we have got you covered.

Let’s make it clear you can get an app idea from anyplace and any person. To get a new idea, you can search out on leading social media platforms such as Facebook, Twitter, LinkedIn.

Besides this, you can also get new app ideas on platforms like Quora.

After getting an idea, a majority of people struggle with what to do with an app idea.

Now coming back to our topic, you must validate your app idea first and then develop and launch it in the market. Why?

Because someone who has originally thought of the app idea, you would have a biased perspective about how attractive the app would be for your target audience.

Validation of an app idea allows you to get genuine feedback from your target audience about whether they truly like it.

They would be able to tell whether the app that you want to build will help them in overcoming their pain points.

Validating an idea before the app is launched can spare you from great disappointment, as you will know beforehand the attractiveness of your app idea to the target audience.

Validating an app idea allows you to get an accurate opinion from your target audience about how good your idea is and what shortcomings it has that you need to solve first before launching the app in the app in the market.

Let’s give you a broad perspective about how to validate your app idea so that when it is launched in the market you get the response that you desire.

Talk to the targeted user

The most effective way to validate your app idea is to seek feedback from the target audience.

To do this, you have to know who to contact and how to do that.

In this task, you have to first create the user personas, and then define the user group who will most likely use your app to resolve their pain points.

After you have defined your user group, the next step is to reach out to them and get their feedback.

To do this, you can launch a survey focusing on your app.

The survey can be launched through social media ads, Reddit, Quora, community-based websites, and so on.

The feedback from your target audience will help you understand the importance and the frequency with which they face the issue that you wish to solve through your app.

The survey should also give you a better idea regarding how satisfied they are with the present solution and whether they are willing to pay for something that would offer them a better way to deal with the issue.

Another great way to find out whether your app idea would get market success is to do some research in the app market.

To do this successfully, you should first search for some key terms that are associated with your mobile app idea.

The next step is to go through their feedback or suggestion section to find out what features in these apps could be improved upon.

This will give you a comprehensive idea about what your target audience wants from such an app that you can include in your app design.

You can attend hackathons

You can attend hackathons and pitch meetups to get some new ideas that you can incorporate into your app.

In the proof of concept, the basic version of the app is distributed for the in-house team.

In this stage, usability is not a big issue, but looking inside a mobile app at a very basic level and its workflow.

This will give the stakeholders an idea of how the app will function.

In this stage, you can get feedback from other peoples in the team as well as your employees about what changes need to be done to make the app more effective.

This step is a bit more comprehensive than the POC because in the app prototype you can showcase the features that you wish to add to the app.

This will enable your stakeholders to find out how your app will function when it is launched in the market as well as its layout and design.

In this step, the app developers and designers can comment on whether the app design and features integration are feasible or not.

With the help of MVP, you will be able to understand how your target audience is using the app.

The MVP offers a chance to identify the pain points of the users and verify the viability of the app in the market.

Furthermore, the MVP can help the developing team to verify whether the assumption they have made about the app and its usability is correct.

Creating an app is a great way to earn a profit, provided the app solves the issues for which you have created it in the first place.

Therefore, it is crucial to determine whether the idea that you have conceived will succeed in the market before you invest your time and money in building the app.

We hope that in this article, we have given you clear guidelines about how to find out whether the app idea that you have thought about is worth pursuing.

Advertising on Telegram: All you need to know

Advertising is very important for businesses and startups. If you want to be more visible among people and audiences, you need to…
By AdminMay 8, 2022

Are you also getting the error code 0×0 0×0 on your computer or laptop being a Windows operating system user? If yes,…
By AdminMarch 28, 2022

Screen recording is a process that allows you to record what’s happening on your computer screen. It can be useful for showing…
By AdminDecember 28, 2021